Make Do...in more ways than one!

Last year I followed along oogling over the projects various sewers were creating for The Historical Sew Fortnightly Challenge hosted by The Dreamstress.  This year, I decided to join in on the fun.  The reason is multifaceted a) it will encourage me to make some of the wonderful historical garments I incessantly pin on Pinterest, b) it will get me back into the swing of posting on this little blog of mine and sharing projects with my family, and c) it sounds like a fun creative challenge.

I've decided to aim for doing the "half marathon."  In other words, instead of trying to do all 24 challenges, I'll aim to participate in 12 challenges.  That way I will have a month to work on each challenge, rather than two weeks, which I just don't see fitting in well to my current busy schedule!

The first challenge this year is entitled Make Do & Mend.  I ended up starting this challenge a little early, as I was looking to make myself a new dress to wear for Christmas and the parties that come with it.  I went digging in my stash of vintage patterns and found one from Jessica's grandmother...one of those fabulous mail-order patterns!  When I started working on the dress I thought it would be perfect for this challenge as it would fit the theme in a couple of different ways.  First of all, the dress looked to be from the 1940s and therefore might have been made by someone in the midst of the Make Do & Mend movement during WWII.  And secondly, it was made entirely of fabric I found in my stash.  Originally I wanted the main body of the dress to be the print, with the accents in solid red...but lo and behold I didn't have enough print to do that so I had to change it up to make do with the fabric I already had. 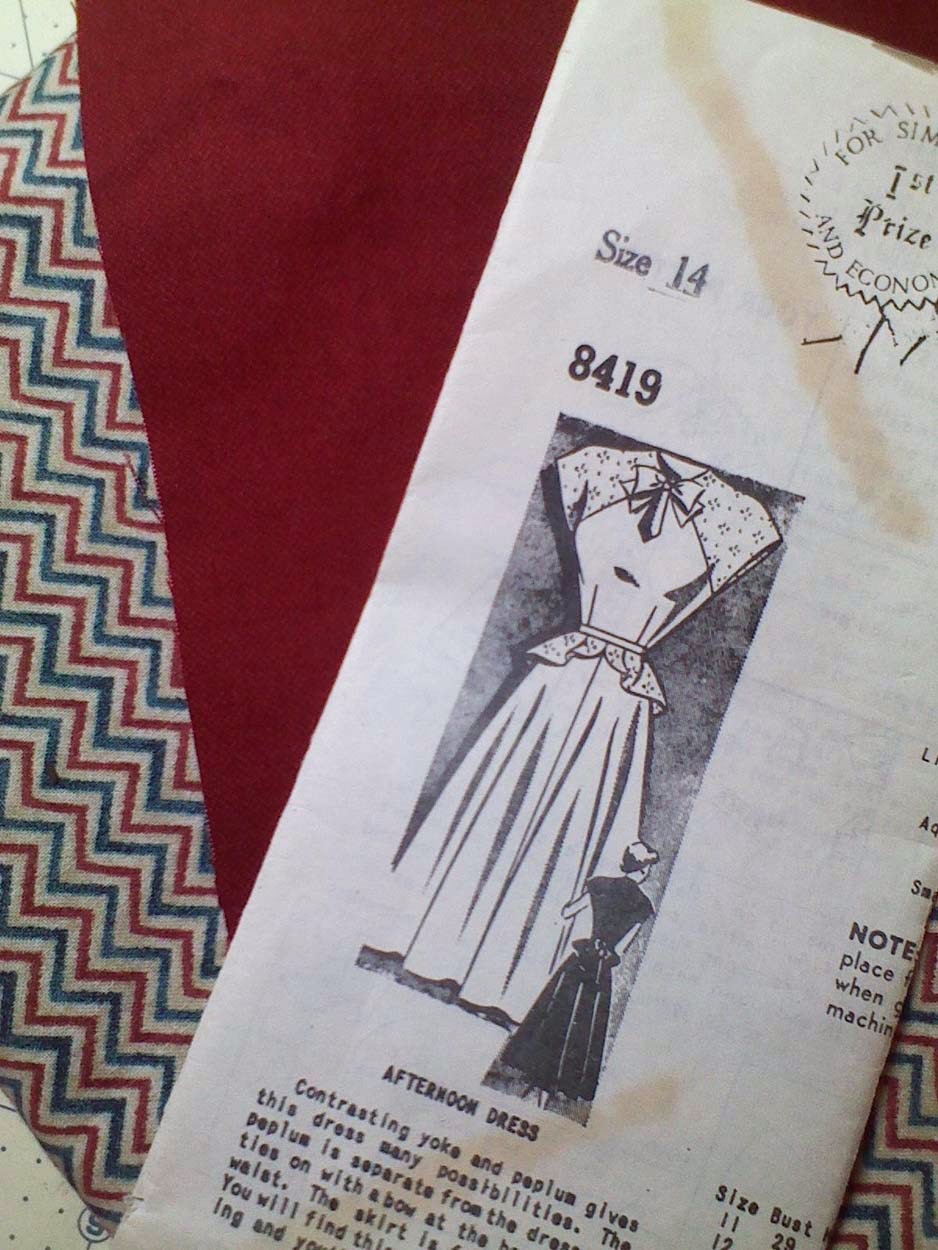 Now...here is where I failed on this challenge.  Most of my interest in historical fashion is in the extended 19th century...ask me when a garment was made during that period and I can narrow it down to 5 years or less.  Post-1925, however, I'm still working on really getting to know all the little nuances as fashions began changing more rapidly and the ready-to-wear industry boomed with fashion trends, in general, starting to move more quickly.  So, I went online to look up this pattern to see if I could find an exact date...I was guessing it was somewhere around the mid-1940s, so right about the cutoff date of 1945.  Good news...I found an advertisement for this dress in a newspaper online!  Check it out here.  Now, if you went to the link you have probably already guessed the bad news.  That's right, according to the newspaper advertisement the dress is from 1950.  Whomp whomp.  :-(

I've decided to go a head and post it, as I fully believed when I was making it that it would be perfect for this challenge.  I guess I'll just have to date before I make when tackling something 1940s for any future challenges!! 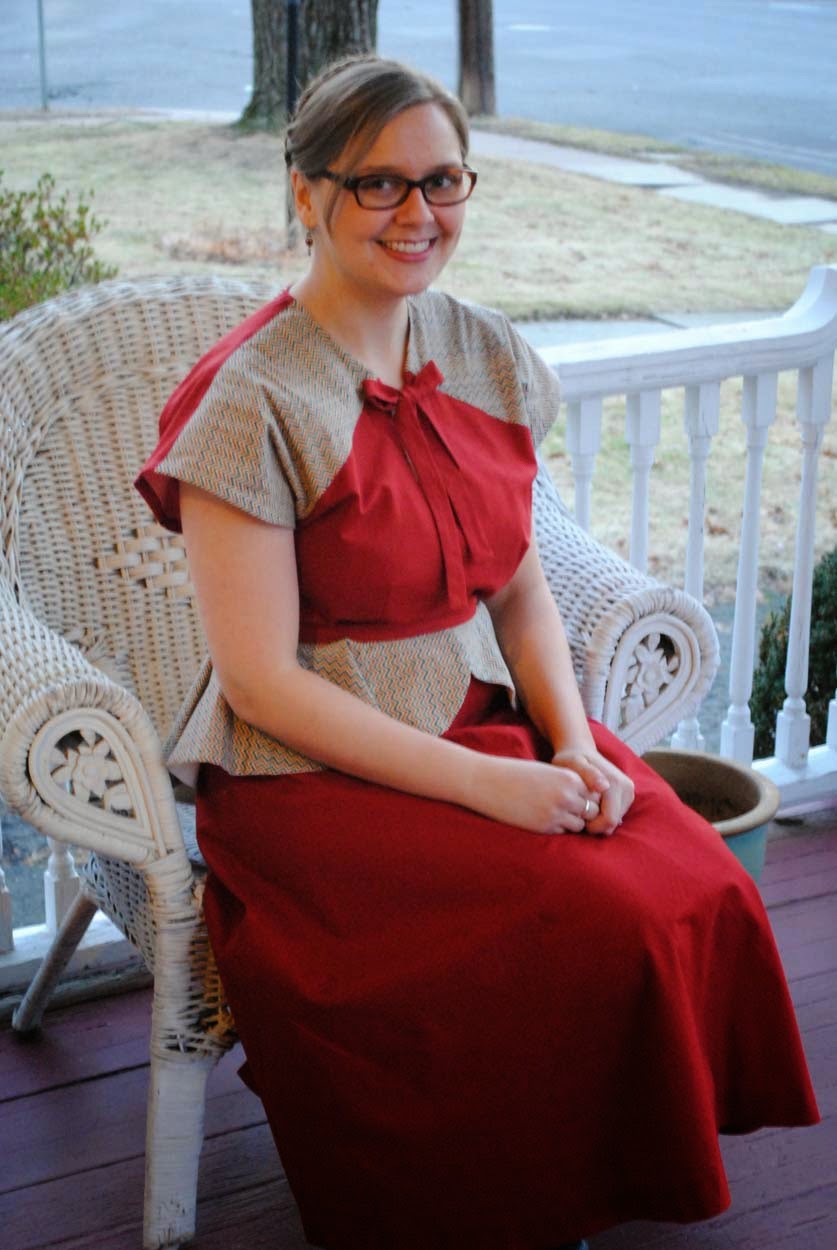 The Challenge: Make Do & Mend
Fabric: 100% cotton, both print and solid
Pattern: Sue Burnett 8419
Year: 1950
Notions: snaps and hooks for the side placket closing
How historically accurate is it? Pretty accurate
Hours to complete:  Hmm...forgot to track this...probably around 6-8?
First worn:  Work holiday party
Total cost:  Nothing right then...everything was from my stash 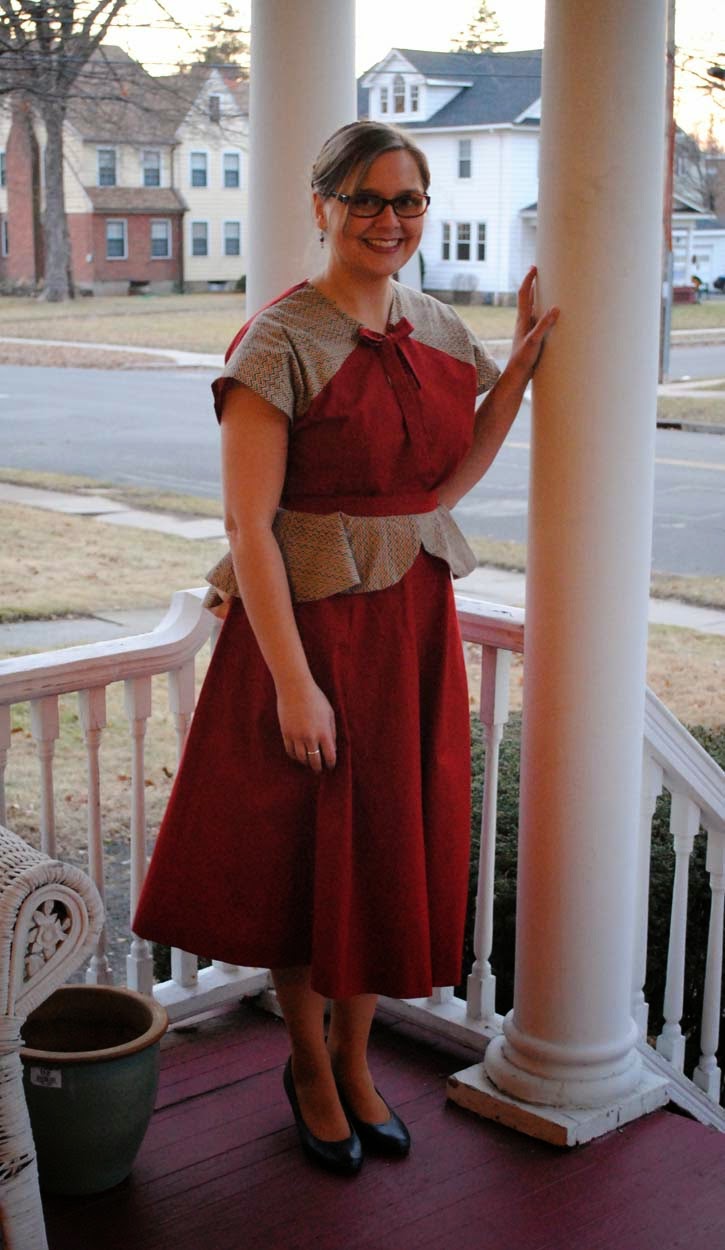 Last week Young House Love presented a challenge...the Unofficial Macklemore Challenge!  If you are unaware of the fabulous song that is "Thrift Shop" by Macklemore and Ryan Lewis, check out the clean version here...and the original version here.

Sunday Jessica and I headed over to one of our favorite thrift shops, Savers, and had a bit of fun. Step 2: Continue on your shopping excursion spending no more than your $20...(in our case we didn't really find anything worth buying...you can't always win)...and find some of the sweet stuff they mention in the song. (not entirely sure HOW you "pop some tags" but this was our attempt!) If you have a secret love of white rappers and thrift shopping go forth and enjoy!  We certainly had fun...although we got quite a few weird looks from our fellow shoppers :-)

Are you a thrift-shopaholic?  What kinds of things do you always search for?  Anyone else a closeted white-rapper lover?  Or just secretly enjoy doing things that make those around you go "huh?"

Posted by Midwest Nutmeg at 9:55 PM No comments:

Things have been a bit crazy around here lately...but good crazy.  The end of summer has brought a lot of things to do like run our first 5k (under 37 minutes baby!!!), host a few dinner parties and a wedding shower on our back porch with our new door-turned-table that you can find here, go hunting at tag sales and estate sales, attend a vintage clothing auction, and go to the last Brimfield Antiques Market of the season.  So, needless to say, there are a lot of projects and fun times to catch you all up on, but first I have to process all the pictures and write up the posts.  Maybe I'll take advantage of the cooler evenings and sit with my laptop on the back porch with a warm drink...hmmmm....  There are also a lot of things coming up, like out-of-town guests to christen our guest bedroom, another race (this time 5 miles during a team marathon...), and an art show!  I'll post again later (after the house is all clean for this weekend) and fill you in even more with what I've missed telling you and what's going on now.

Posted by Midwest Nutmeg at 10:16 AM No comments:

Some craft projects are thought about long and hard and executed after hours of hard work and creative problem-solving.  Others are created out of an immediate need.  This is one of those projects.

I came home the other day and it was particularly stuffy in the apartment.  You see, we have only one window in the living room and this gorgeous double door out to the deck.  However, the door doesn't have a screen, so if you want to open the door to let in a breeze but don't want to let in the bugs, it is nearly impossible.  And thus instant craft time ensued.

Have you ever seen those insta screen doors?  Like this one.  Well, it gave me an idea...so I gathered supplies and got to work. I actually ended up not using the cardboard, but forgot to retake the picture.  It was a pretty simple project with a pretty simple idea.  Plus it was the best kind of project because it used things I already had around the house, including some leftover nylon screening.

* Cut screening the length of the door plus about six inches.
* Fold over the top 3" to create a casing, and stitch.  I decided to use some fun embroidery floss to add some interest. * Slide the tension rod through the casing and adjust to fit at the top of the door.

You can also create a casing at the bottom of the screen and slide in some cardboard, weights, or anything you can think of to weigh the bottom down.  I left enough extra at the bottom to do just this, but I was desperate for some cool air and decided to add that feature later. Somehow I got lucky enough that the screening we had was the exact width of the doorway.  Not sure how that happened, but I sure am glad it did!  If your screen is too wide, just trim it down a bit before you start.  You want to make sure it will fit from side to side with a bit of extra to close any gaps.  Now, this does not work for keeping cats in or out (it took Annie about 2 minutes to figure out if she headed to the corner she could just push it back).  However, that might change depending on what we use to weigh it down.  But it did significantly cut down on the house flies and flying insects that came into the house.

So, yay for instant crafts, a cooler house, and a project using nothing but found supplies!!!

Have you done any instant crafts lately?  Become so desperate you just have to finish a project right now?  Or just any home improvements?  Or, in our case, removable apartment improvements?
Posted by Midwest Nutmeg at 10:48 PM No comments:

Hello. I'm Karen. Once I made my way from the Midwest to the Nutmeg State, I started spending my days working in the world of non-profits. After a day at the museum, I love coming home and taking a little time to create. My parents taught me a lot about the value of making something with your own two hands and I can't wait to show you some of the results.

So, come back to visit and you'll get to know a little bit about me and the things I love.